This week’s theme was platonic relationships, be it friends, parents, siblings, or whatever else! Romance can be fun, but I love reading about characters with special bonds outside of romantic love. As a teen services librarian, I am especially aware of how valuable these relationships can be for teens, so I love when I find a YA or MG book featuring a wonderful platonic relationship. 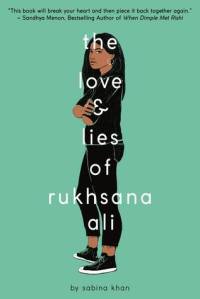 1. The Love & Lies of Rukhsana Ali by Sabina Khan

I just finished this 2019 release and I was so touched my Rukhsana’s relationship with her grandmother. Her grandmother was one of my favorite characters & I can’t wait for everyone to read this book!

Goodreads summary: “Seventeen-year-old Rukhsana Ali tries her hardest to live up to her conservative Muslim parents’ expectations, but lately she’s finding that harder and harder to do. She rolls her eyes instead of screaming when they blatantly favor her brother and she dresses conservatively at home, saving her crop tops and makeup for parties her parents don’t know about. Luckily, only a few more months stand between her carefully monitored life in Seattle and her new life at Caltech, where she can pursue her dream of becoming an engineer.

But when her parents catch her kissing her girlfriend Ariana, all of Rukhsana’s plans fall apart. Her parents are devastated; being gay may as well be a death sentence in the Bengali community. They immediately whisk Rukhsana off to Bangladesh, where she is thrown headfirst into a world of arranged marriages and tradition. Only through reading her grandmother’s old diary is Rukhsana able to gain some much needed perspective.

Rukhsana realizes she must find the courage to fight for her love, but can she do so without losing everyone and everything in her life?”

2. You Don’t Know Everything, Jilly P! by Alex Gino

Jilly & her aunt, Alicia, had such a great relationship in this middle grade novel. Alicia pushes Jilly to question her white privilege and they both support each other to be better allies.

Goodreads summary: “Jilly thinks she’s figured out how life works. But when her sister Emma is born Deaf, she realizes how much she still has to learn.

A big fantasy reader, Jilly connects with another fan, Derek, who is a Deaf Black ASL user. She goes to Derek for advice but doesn’t always know the best way to ask for it and makes some mistakes along the way. Jilly has to step back to learn to be an ally, a sister, and a friend, understanding that life works in different ways for different people, and that being open to change can make you change in the best possible ways.”

This is the book to read if you need a good cry. It captures how complicated & messy growing up and grieving can be. The friendship that grows between June and Toby will destroy you.

Goodreads summary: “1987. There’s only one person who has ever truly understood fourteen-year-old June Elbus, and that’s her uncle, the renowned painter Finn Weiss. Shy at school and distant from her older sister, June can only be herself in Finn’s company; he is her godfather, confidant, and best friend. So when he dies, far too young, of a mysterious illness her mother can barely speak about, June’s world is turned upside down. But Finn’s death brings a surprise acquaintance into June’s life—someone who will help her to heal, and to question what she thinks she knows about Finn, her family, and even her own heart.

At Finn’s funeral, June notices a strange man lingering just beyond the crowd. A few days later, she receives a package in the mail. Inside is a beautiful teapot she recognizes from Finn’s apartment, and a note from Toby, the stranger, asking for an opportunity to meet. As the two begin to spend time together, June realizes she’s not the only one who misses Finn, and if she can bring herself to trust this unexpected friend, he just might be the one she needs the most. ”

Tanner’s parents are the kind of parents that go over the top wearing rainbows and queer pride stuff to make sure Tanner knows that they’re okay with him being bi. They were at times cringe-worthy, but I loved reading about a queer teen who had the family support he deserved.

Goodreads summary: “Three years ago, Tanner Scott’s family relocated from California to Utah, a move that nudged the bisexual teen temporarily back into the closet. Now, with one semester of high school to go, and no obstacles between him and out-of-state college freedom, Tanner plans to coast through his remaining classes and clear out of Utah.

But when his best friend Autumn dares him to take Provo High’s prestigious Seminar—where honor roll students diligently toil to draft a book in a semester—Tanner can’t resist going against his better judgment and having a go, if only to prove to Autumn how silly the whole thing is. Writing a book in four months sounds simple. Four months is an eternity.

It turns out, Tanner is only partly right: four months is a long time. After all, it takes only one second for him to notice Sebastian Brother, the Mormon prodigy who sold his own Seminar novel the year before and who now mentors the class. And it takes less than a month for Tanner to fall completely in love with him.”

5. This is What it Feels Like by Rebecca Barrow

I’m currently reading this YA contemporary about a group of friends torn apart and finding their way back to each other and I’M OBSESSED. I love that it shows a teen parent (who is an awesome mom!) who has friends who support her and help take care of her daughter.

Goodreads summary: “It doesn’t matter what the prize for the Sun City Originals contest is this year.

Who cares that’s it’s fifteen grand? Who cares about a gig opening for one of the greatest bands to ever play this town?

Not Dia, that’s for sure. Because Dia knows that without a band, she hasn’t got a shot at winning Sun City. Because ever since Hanna’s drinking took over her life, Dia and Jules haven’t been in it. And ever since Hanna left — well, there hasn’t been a band.

It used to be the three of them, Dia, Jules, and Hanna, messing around and making music and planning for the future. But that was then, and this is now — and now means a baby, a failed relationship, a stint in rehab, all kinds of off beats that have interrupted the rhythm of their friendship. No contest can change that. Right?

But like the lyrics of a song you used to play on repeat, there’s no forgetting a best friend. And for Dia, Jules, and Hanna, this impossible challenge — to ignore the past, in order to jumpstart the future — will only become possible if they finally make peace with the girls they once were, and the girls they are finally letting themselves be.”

AND HERE’S SOME ON MY TBR:

Goodreads summary: “Jasmine and Chelsea are sick of the way women are treated even at their progressive NYC high school, so they decide to start a Women’s Rights Club. They post everything online—poems, essays, videos of Chelsea performing her poetry, and Jasmine’s response to the racial macroaggressions she experiences—and soon they go viral. But with such positive support, the club is also targeted by online trolls. When things escalate, the principal shuts the club down. Jasmine and Chelsea will risk everything for their voices—and those of other young women—to be heard.”

7. If You’re Out There by Katy Loutzenhiser

This upcoming YA release is about a teen trying to find out what happened to her best friend when she ghosts her after moving away. I’m so interested to see what happens in this one!

Goodreads summary: “After Zan’s best friend moves to California, she’s baffled and crushed when Priya suddenly ghosts. Worse, Priya’s social media has turned into a stream of ungrammatical posts chronicling a sunny, vapid new life that doesn’t sound like her at all. Everyone tells Zan not to be an idiot: Let Priya do her reinvention thing, and move on. But until Zan hears Priya say it, she won’t be able to admit that the friendship is finished.

It’s only when she meets Logan, the compelling new guy in Spanish class, that Zan begins to open up about her sadness, her insecurity, her sense of total betrayal. And he’s just as willing to throw himself into the investigation when everyone else thinks her suspicions are crazy.

I have an ARC of this recent middle grade novel about blended families & sisterhood and am hoping to get to it soon!

Goodreads summary: “G-baby and her younger sister, Peaches, are still getting used to their “blended-up” family. They live with Mama and Frank out in the suburbs, and they haven’t seen their real daddy much since he married Millicent. G-baby misses her best friend back in Atlanta, and is crushed that her glamorous new stepsister, Tangie, wants nothing to do with her.

G-baby is so preoccupied with earning Tangie’s approval that she isn’t there for her own little sister when she needs her most. Peaches gets sick-really sick. Suddenly, Mama and Daddy are arguing like they did before the divorce, and even the doctors at the hospital don’t know how to help Peaches get better.

It’s up to G-baby to put things right. She knows Peaches can be strong again if she can only see that their family’s love for her really is like sky.” 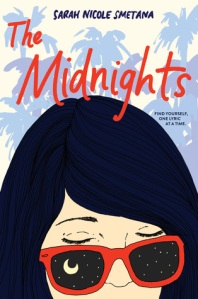 9. The Midnights by Sarah Nicole Smetana

This novel about the loss of a parent sounds so heartbreaking.

Goodreads summary: “Susannah Hayes has never been in the spotlight, but she dreams of following her father, a former rock star, onto the stage. As senior year begins, she’s more interested in composing impressive chord progressions than college essays, certain that if she writes the perfect song, her father might finally look up from the past long enough to see her. But when he dies unexpectedly her dreams—and her reality—shatter.

While Susannah struggles with grief, her mother uproots them to a new city. There, Susannah realizes she can reinvent herself however she wants: a confident singer-songwriter, member of a hip band, embraced by an effortlessly cool best friend. But Susannah is not the only one keeping secrets, and soon, harsh revelations threaten to unravel her life once again.”

10. Other Words for Home by Jasmine Warga

This middle grade novel (with the most gorgeous cover!) is about immigration and family and I can’t wait to read it.

Goodreads summary: “Jude never thought she’d be leaving her beloved older brother and father behind, all the way across the ocean in Syria. But when things in her hometown start becoming volatile, Jude and her mother are sent to live in Cincinnati with relatives.

At first, everything in America seems too fast and too loud. The American movies that Jude has always loved haven’t quite prepared her for starting school in the US—and her new label of “Middle Eastern,” an identity she’s never known before. But this life also brings unexpected surprises—there are new friends, a whole new family, and a school musical that Jude might just try out for. Maybe America, too, is a place where Jude can be seen as she really is.

This lyrical, life-affirming story is about losing and finding home and, most importantly, finding yourself.”

What is your favorite book about friends or family? Do you prefer reading about romantic relationships or platonic ones?