May is Mental Health Awareness Month, and even though the month is almost over, I wanted to share my top ten books about mental health! Mental health is a topic that’s super important to me, and as a teen librarian, I love finding YA books that deal with mental health so that I can add it to my library’s collection.

Read these, recommend them, share them, and promote them! 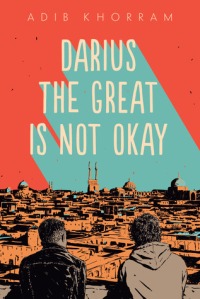 1. Darius the Great Is Not Okay by Adib Khorram

Goodreads summary: “Darius Kellner speaks better Klingon than Farsi, and he knows more about Hobbit social cues than Persian ones. He’s about to take his first-ever trip to Iran, and it’s pretty overwhelming–especially when he’s also dealing with clinical depression, a disapproving dad, and a chronically anemic social life. In Iran, he gets to know his ailing but still formidable grandfather, his loving grandmother, and the rest of his mom’s family for the first time. And he meets Sohrab, the boy next door who changes everything.

Sohrab makes sure people speak English so Darius can understand what’s going on. He gets Darius an Iranian National Football Team jersey that makes him feel like a True Persian for the first time. And he understands that sometimes, best friends don’t have to talk. Darius has never had a true friend before, but now he’s spending his days with Sohrab playing soccer, eating rosewater ice cream, and sitting together for hours in their special place, a rooftop overlooking the Yazdi skyline.

Sohrab calls him Darioush–the original Persian version of his name–and Darius has never felt more like himself than he does now that he’s Darioush to Sohrab. When it’s time to go home to America, he’ll have to find a way to be Darioush on his own.”

This YA book has some of the most realistic anxiety rep I’ve ever read, and it was so powerful!

Goodreads summary: “Kiko Himura has always had a hard time saying exactly what she’s thinking. With a mother who makes her feel unremarkable and a half-Japanese heritage she doesn’t quite understand, Kiko prefers to keep her head down, certain that once she makes it into her dream art school, Prism, her real life will begin.

But then Kiko doesn’t get into Prism, at the same time her abusive uncle moves back in with her family. So when she receives an invitation from her childhood friend to leave her small town and tour art schools on the west coast, Kiko jumps at the opportunity in spite of the anxieties and fears that attempt to hold her back. And now that she is finally free to be her own person outside the constricting walls of her home life, Kiko learns life-changing truths about herself, her past, and how to be brave.”

3. A Quiet Kind of Thunder by Sara Barnard

Steffi has severe social anxiety that has caused selective mutism, and this was handled with such care and sensitivity. This is one of my absolute favorite YA romances that I will recommend again and again!

Goodreads summary: “Steffi has been a selective mute for most of her life. The condition’s name has always felt ironic to her, because she certainly does not “select” not to speak. In fact, she would give anything to be able to speak as easily and often as everyone around her can. She suffers from crippling anxiety, and uncontrollably, in most situations simply can’t open her mouth to get out the words.

Steffi’s been silent for so long that she feels completely invisible. But Rhys, the new boy at school, sees her. He’s deaf, and her knowledge of basic sign language means that she’s assigned to help him acclimate. To Rhys, it doesn’t matter that Steffi doesn’t talk. As they find ways to communicate, Steffi discovers that she does have a voice, and that she’s falling in love with the one person who makes her feel brave enough to use it. But as she starts to overcome a lifelong challenge, she’ll soon confront questions about the nature of her own identity and the very essence of what it is to know another person.”

4. Love and Other Alien Experiences by Kerry Winfrey

Kerry is one of my favorite authors, and I love that she approaches agoraphobia and anxiety with care and thoughtfulness.

Goodreads summary: “Mallory hasn’t left the house in sixty-seven days–since the day her dad left. She attends her classes via webcam, rarely leaves her room (much to her brother’s chagrin), and spends most of her time watching The X-Files or chatting with the always obnoxious BeamMeUp on New Mexico’s premier alien message board.

But when she’s shockingly nominated for homecoming queen, her life takes a surprising turn. She slowly begins to open up to the world outside. And maybe if she can get her popular jock neighbor Brad Kirkpatrick to be her homecoming date, her classmates will stop calling her a freak.

In this heartwarming and humorous debut, Mallory discovers first love and the true meaning of home–just by taking one small step outside her house.”

5. I Wish You All the Best by Mason Deaver

I just finished this YA contemporary, and the anxiety and depression portrayal felt so real. I love that this book discusses panic attacks and different methods of mental health treatment.

Goodreads summary: “When Ben De Backer comes out to their parents as nonbinary, they’re thrown out of their house and forced to move in with their estranged older sister, Hannah, and her husband, Thomas, whom Ben has never even met. Struggling with an anxiety disorder compounded by their parents’ rejection, they come out only to Hannah, Thomas, and their therapist and try to keep a low profile in a new school.

I haven’t read this anthology yet but have heard amazing things! It’s at the top of my TBR and it includes so many of my favorite authors.

What does it mean to be crazy? Is using the word crazy offensive? What happens when such a label gets attached to your everyday experiences?

In order to understand mental health, we need to talk openly about it. Because there’s no single definition of crazy, there’s no single experience that embodies it, and the word itself means different things—wild? extreme? disturbed? passionate?—to different people.

(Don’t) Call Me Crazy is a conversation starter and guide to better understanding how our mental health affects us every day. Thirty-three writers, athletes, and artists offer essays, lists, comics, and illustrations that explore their personal experiences with mental illness, how we do and do not talk about mental health, help for better understanding how every person’s brain is wired differently, and what, exactly, might make someone crazy.” 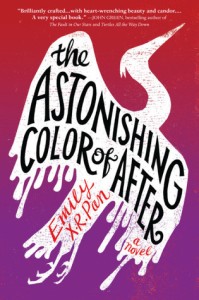 7. The Astonishing Color of After by Emily X.R. Pan

This sweeping, beautiful YA book artfully tackles what it’s like to have a parent struggling with depression. This book breaks down stigmas around mental health and is one of the most honest books I’ve ever seen dealing with mental health treatment.

Goodreads summary: “Leigh Chen Sanders is absolutely certain about one thing: When her mother died by suicide, she turned into a bird.

Leigh, who is half Asian and half white, travels to Taiwan to meet her maternal grandparents for the first time. There, she is determined to find her mother, the bird. In her search, she winds up chasing after ghosts, uncovering family secrets, and forging a new relationship with her grandparents. And as she grieves, she must try to reconcile the fact that on the same day she kissed her best friend and longtime secret crush, Axel, her mother was taking her own life.

Alternating between real and magic, past and present, friendship and romance, hope and despair, The Astonishing Color of After is a novel about finding oneself through family history, art, grief, and love.  “

Shaun David Hutchinson is so skilled at talking about mental health, and I already know I’m going to love his memoir! I can’t wait to read it soon.

Goodreads summary: “Shaun David Hutchinson was nineteen. Confused. Struggling to find the vocabulary to understand and accept who he was and how he fit into a community in which he couldn’t see himself. The voice of depression told him that he would never be loved or wanted, while powerful and hurtful messages from society told him that being gay meant love and happiness weren’t for him.

A million moments large and small over the years all came together to convince Shaun that he couldn’t keep going, that he had no future. And so he followed through on trying to make that a reality.

Thankfully Shaun survived, and over time, came to embrace how grateful he is and how to find self-acceptance. In this courageous and deeply honest memoir, Shaun takes readers through the journey of what brought him to the edge, and what has helped him truly believe that it does get better.”

There’s so much to love about this book, including the fact that the main character is a Black Jewish bi girl! I love Brandy’s books, and she did a superb job portraying how a diagnosis can affect a family.

Goodreads summary: “When Suzette comes home to Los Angeles from her boarding school in New England, she isn’t sure if she’ll ever want to go back. L.A. is where her friends and family are (along with her crush, Emil). And her stepbrother, Lionel, who has been diagnosed with bipolar disorder, needs her emotional support.

But as she settles into her old life, Suzette finds herself falling for someone new…the same girl her brother is in love with. When Lionel’s disorder spirals out of control, Suzette is forced to confront her past mistakes and find a way to help her brother before he hurts himself–or worse.”

10. The Weight of Our Sky by Hanna Alkaf

This historical YA novel with OCD rep was beautifully written, and also has own-voices Muslim rep!

Goodreads summary: “A music-loving teen with OCD does everything she can to find her way back to her mother during the historic race riots in 1969 Kuala Lumpur, Malaysia, in this heart-pounding literary debut.

Melati Ahmad looks like your typical moviegoing, Beatles-obsessed sixteen-year-old. Unlike most other sixteen-year-olds though, Mel also believes that she harbors a djinn inside her, one who threatens her with horrific images of her mother’s death unless she adheres to an elaborate ritual of counting and tapping to keep him satisfied.

But there are things that Melati can’t protect her mother from. On the evening of May 13th, 1969, racial tensions in her home city of Kuala Lumpur boil over. The Chinese and Malays are at war, and Mel and her mother become separated by a city in flames.

With a 24-hour curfew in place and all lines of communication down, it will take the help of a Chinese boy named Vincent and all of the courage and grit in Melati’s arsenal to overcome the violence on the streets, her own prejudices, and her djinn’s surging power to make it back to the one person she can’t risk losing.”

What is your favorite book that deals with mental health?