Can you believe we only have a week left of April? I’m already getting ready to read the May books on my TBR. There are SO MANY May releases, and I wish I could read them all!

Here’s my top ten May releases on my TBR: 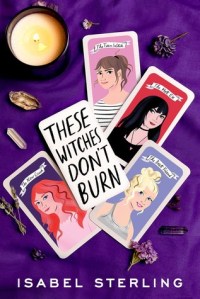 This is basically the book of my dreams and I’m counting down the days until I can read it!

Goodreads summary: “Hannah’s a witch, but not the kind you’re thinking of. She’s the real deal, an Elemental with the power to control fire, earth, water, and air. But even though she lives in Salem, Massachusetts, her magic is a secret she has to keep to herself. If she’s ever caught using it in front of a Reg (read: non-witch), she could lose it. For good. So, Hannah spends most of her time avoiding her ex-girlfriend (and fellow Elemental Witch) Veronica, hanging out with her best friend, and working at the Fly by Night Cauldron selling candles and crystals to tourists, goths, and local Wiccans.

But dealing with her ex is the least of Hannah’s concerns when a terrifying blood ritual interrupts the end-of-school-year bonfire. Evidence of dark magic begins to appear all over Salem, and Hannah’s sure it’s the work of a deadly Blood Witch. The issue is, her coven is less than convinced, forcing Hannah to team up with the last person she wants to see: Veronica.

While the pair attempt to smoke out the Blood Witch at a house party, Hannah meets Morgan, a cute new ballerina in town. But trying to date amid a supernatural crisis is easier said than done, and Hannah will have to test the limits of her power if she’s going to save her coven and get the girl, especially when the attacks on Salem’s witches become deadlier by the day.” 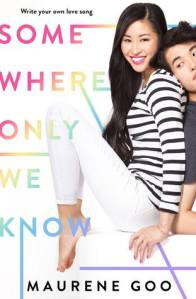 2. Somewhere Only We Know by Maurene Goo

Goodreads summary: “10 00 p.m.: Lucky is the biggest K-pop star on the scene, and she’s just performed her hit song “Heartbeat” in Hong Kong to thousands of adoring fans. She’s about to debut on The Tonight Show in America, hopefully a breakout performance for her career. But right now? She’s in her fancy hotel, trying to fall asleep but dying for a hamburger.

11 00 p.m.: Jack is sneaking into a fancy hotel, on assignment for his tabloid job that he keeps secret from his parents. On his way out of the hotel, he runs into a girl wearing slippers, a girl who is single-mindedly determined to find a hamburger. She looks kind of familiar. She’s very cute. He’s maybe curious.

3. I Wish You All the Best by Mason Deaver

I’ve probably now talked about this book a million times, but that’s how excited I am! You need to add this to your TBR!

Goodreads summary: “When Ben De Backer comes out to their parents as nonbinary, they’re thrown out of their house and forced to move in with their estranged older sister, Hannah, and her husband, Thomas, whom Ben has never even met. Struggling with an anxiety disorder compounded by their parents’ rejection, they come out only to Hannah, Thomas, and their therapist and try to keep a low profile in a new school.

4. There’s Something About Sweetie by Sandhya Menon

I will forever read ANYTHING from Sandhya!

Goodreads summary: “Ashish Patel didn’t know love could be so…sucky. After he’s dumped by his ex-girlfriend, his mojo goes AWOL. Even worse, his parents are annoyingly, smugly confident they could find him a better match. So, in a moment of weakness, Ash challenges them to set him up.

The Patels insist that Ashish date an Indian-American girl—under contract. Per subclause 1(a), he’ll be taking his date on “fun” excursions like visiting the Hindu temple and his eccentric Gita Auntie. Kill him now. How is this ever going to work?

Sweetie Nair is many things: a formidable track athlete who can outrun most people in California, a loyal friend, a shower-singing champion. Oh, and she’s also fat. To Sweetie’s traditional parents, this last detail is the kiss of death.

Sweetie loves her parents, but she’s so tired of being told she’s lacking because she’s fat. She decides it’s time to kick off the Sassy Sweetie Project, where she’ll show the world (and herself) what she’s really made of.

Ashish and Sweetie both have something to prove. But with each date they realize there’s an unexpected magic growing between them. Can they find their true selves without losing each other?” 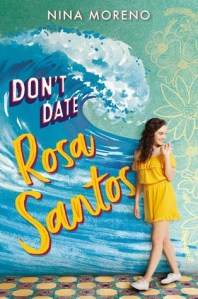 Do you ever just know you’re gonna love a book? That’s how I feel about Nina’s debut!

Goodreads summary: “Rosa Santos is cursed by the sea-at least, that’s what they say. Dating her is bad news, especially if you’re a boy with a boat.

But Rosa feels more caught than cursed. Caught between cultures and choices. Between her abuela, a beloved healer and pillar of their community, and her mother, an artist who crashes in and out of her life like a hurricane. Between Port Coral, the quirky South Florida town they call home, and Cuba, the island her abuela refuses to talk about.
As her college decision looms, Rosa collides-literally-with Alex Aquino, the mysterious boy with tattoos of the ocean whose family owns the marina. With her heart, her family, and her future on the line, can Rosa break a curse and find her place beyond the horizon?” 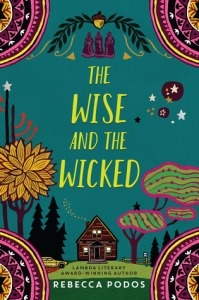 6. The Wise and the Wicked by Rebecca Podos

I loved Like Water and am so excited to read more from Rebecca!

Goodreads summary: “Ruby Chernyavsky has been told the stories since she was a child: The women in her family, once possessed of great magical abilities to remake lives and stave off death itself, were forced to flee their Russian home for America in order to escape the fearful men who sought to destroy them. Such has it always been, Ruby’s been told, for powerful women. Today, these stories seem no more real to Ruby than folktales, except for the smallest bit of power left in their blood: when each of them comes of age, she will have a vision of who she will be when she dies—a destiny as inescapable as it is inevitable. Ruby is no exception, and neither is her mother, although she ran from her fate years ago, abandoning Ruby and her sisters. It’s a fool’s errand, because they all know the truth: there is no escaping one’s Time.

Until Ruby’s great-aunt Polina passes away, and, for the first time, a Chernyavsky’s death does not match her vision. Suddenly, things Ruby never thought she’d be allowed to hope for—life, love, time—seem possible. But as she and her cousin Cece begin to dig into the family’s history to find out whether they, too, can change their fates, they learn that nothing comes without a cost. Especially not hope.”

Goodreads summary: “The spellbinding tale of six queer witches forging their own paths, shrouded in the mist, magic, and secrets of the ancient California redwoods.

Danny didn’t know what she was looking for when she and her mother spread out a map of the United States and Danny put her finger down on Tempest, California. What she finds are the Grays: a group of friends who throw around terms like queer and witch like they’re ordinary and everyday, though they feel like an earthquake to Danny. But Danny didn’t just find the Grays. They cast a spell that calls her halfway across the country, because she has something they need: she can bring back Imogen, the most powerful of the Grays, missing since the summer night she wandered into the woods alone. But before Danny can find Imogen, she finds a dead boy with a redwood branch through his heart. Something is very wrong amid the trees and fog of the Lost Coast, and whatever it is, it can kill. Lush, eerie, and imaginative, Amy Rose Capetta’s tale overflows with the perils and power of discovery — and what it means to find your home, yourself, and your way forward.”

8. Let Me Hear a Rhyme by Tiffany D. Jackson

Tiffany’s books are always page-turners that I can’t put down, and I’m sure this one will be no different!

Goodreads summary: “Biggie Smalls was right. Things done changed. But that doesn’t mean that Quadir and Jarrell are okay letting their best friend Steph’s tracks lie forgotten in his bedroom after he’s killed—not when his beats could turn any Bed-Stuy corner into a celebration, not after years of having each other’s backs.

Enlisting the help of Steph’s younger sister, Jasmine, Quadir and Jarrell come up with a plan to promote Steph’s music under a new rap name: The Architect. Soon, everyone in Brooklyn is dancing to Steph’s voice. But then his mixtape catches the attention of a hotheaded music rep and—with just hours on the clock—the trio must race to prove Steph’s talent from beyond the grave.

Now, as the pressure—and danger—of keeping their secret grows, Quadir, Jarrell, and Jasmine are forced to confront the truth about what happened to Steph. Only each has something to hide. And with everything riding on Steph’s fame, together they need to decide what they stand for before they lose everything they’ve worked so hard to hold on to—including each other.”

Ever since If I Was Your Girl, I’ve been dying for another Meredith Russo book! I’m so excited to have an ARC of this one and can’t wait to jump into it.

Goodreads summary: “Two kids, Morgan and Eric, are bonded for life after being born on the same day at the same time. We meet them once a year on their shared birthday as they grow and change: as Eric figures out who he is and how he fits into the world, and as Morgan makes the difficult choice to live as her true self. Over the years, they will drift apart, come together, fight, make up, and break up—and ultimately, realize how inextricably they are a part of each other.”

10. Going Off Script by Jen Wilde

I’ve heard amazing things about Jen Wilde and really want to give her books a try!

Goodreads summary: “Seventeen-year-old Bex is thrilled when she gets an internship on her favorite tv show, Silver Falls. Unfortunately, the internship isn’t quite what she expected… instead of sitting in a crowded writer’s room volleying ideas back and forth, Production Interns are stuck picking up the coffee.

Determined to prove her worth as a writer, Bex drafts her own script and shares it with the head writer―who promptly reworks it and passes it off as his own! Bex is understandably furious, yet…maybe this is just how the industry works? But when they rewrite her proudly lesbian character as straight, that’s the last straw! It’s time for Bex and her crush to fight back.

Jen Wilde’s newest novel is both a fun, diverse love story and a very relevant, modern take on the portrayal of LGBT characters in media.”

What’s on your TBR for May?

7 thoughts on “Top Ten Tuesday | May Releases on my TBR”