This week’s theme was Fall TBR lists. There are tons of amazing books being released this Fall, so it was really hard narrowing it down to the top ten that I’m most excited about. Creating this list made me even more excited for my Fall reading! 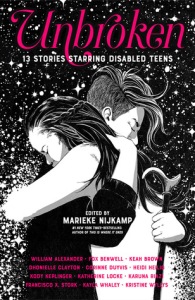 One of my reading goals is to read more anthologies, because it’s such a great way to find new authors and try new genres. Unbroken is one that I’m really excited about because there needs to be more books about disabled teens in YA. I’m so so so happy to see this anthology full of #OwnVoices stories that I can start recommending to teens at my library.

I also love that this anthology has a mix of well-known YA authors and new ones that readers may not have heard of yet. (I’m also a huge sucker for monochromatic covers with pops of color!) 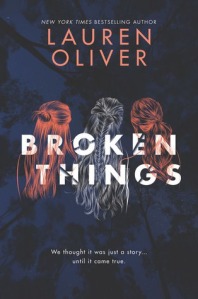 Spooky woods murder? Obviously this needs to go on my Fall TBR. I’m obsessed with this gorgeous cover!

Goodreads summary: “It’s been five years since Summer Marks was brutally murdered in the woods.

Everyone thinks Mia and Brynn killed their best friend. That driven by their obsession with a novel called The Way into Lovelorn the three girls had imagined themselves into the magical world where their fantasies became twisted, even deadly.

The only thing is: they didn’t do it.

On the anniversary of Summer’s death, a seemingly insignificant discovery resurrects the mystery and pulls Mia and Brynn back together once again. But as the lines begin to blur between past and present and fiction and reality, the girls must confront what really happened in the woods all those years ago—no matter how monstrous.” 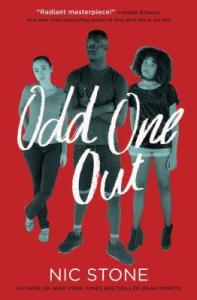 3. Odd One Out by Nic Stone

Nic Stone’s 2017 debut, Dear Martin, was such a powerful read and I’ve been eagerly awaiting another novel from her ever since. This sounds like such a complicated and diverse story of friendship and love. I’m excited to read more from Nic!

Goodreads summary: “Courtney “Coop” Cooper
Dumped. Again. And normally I wouldn’t mind. But right now, my best friend and source of solace, Jupiter Sanchez, is ignoring me to text some girl.

Rae Evelyn Chin
I assumed “new girl” would be synonymous with “pariah,” but Jupiter and Courtney make me feel like I’m right where I belong. I also want to kiss him. And her. Which is . . . perplexing.

Jupiter Charity-Sanchez
The only thing worse than losing the girl you love to a boy is losing her to your boy. That means losing him, too. I have to make a move. . . . 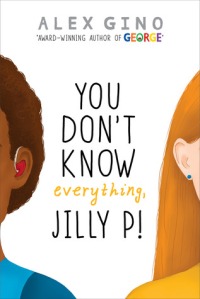 4. You Don’t Know Everything, Jilly P! by Alex Gino

George is one of my favorite middle grade books and Alex Gino is an incredible writer. I’m excited to read their newest book that is all about a girl learning how to be an ally to her Deaf sister & her new Deaf Black friend. There’s such a lack of middle grade books about allyship and I hope we get more soon!

Goodreads summary: “Jilly thinks she’s figured out how life works. But when her sister Emma is born Deaf, she realizes how much she still has to learn.

A big fantasy reader, Jilly connects with another fan, Derek, who is a Deaf Black ASL user. She goes to Derek for advice but doesn’t always know the best way to ask for it and makes some mistakes along the way. Jilly has to step back to learn to be an ally, a sister, and a friend, understanding that life works in different ways for different people, and that being open to change can make you change in the best possible ways.” 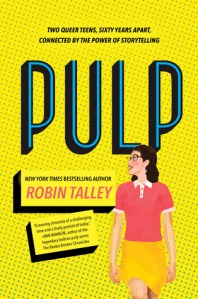 Dual-perspective novels are always fun, and I love that this one is about two queer teenage girls discovering lesbian pulp fiction—one living today, and one living in 1955. This is such an interesting idea that juxtaposes how the experiences of queer youth has changed so drastically over the last few decades. For so many queer folks, reading is a big part of discovering their identity, and I know this book will be so powerful.

Goodreads summary: “In 1955, eighteen-year-old Janet Jones keeps the love she shares with her best friend Marie a secret. It’s not easy being gay in Washington, DC, in the age of McCarthyism, but when she discovers a series of books about women falling in love with other women, it awakens something in Janet. As she juggles a romance she must keep hidden and a newfound ambition to write and publish her own story, she risks exposing herself—and Marie—to a danger all too real.

Sixty-two years later, Abby Zimet can’t stop thinking about her senior project and its subject—classic 1950s lesbian pulp fiction. Between the pages of her favorite book, the stresses of Abby’s own life are lost to the fictional hopes, desires and tragedies of the characters she’s reading about. She feels especially connected to one author, a woman who wrote under the pseudonym “Marian Love,” and becomes determined to track her down and discover her true identity.

In this novel told in dual narratives, New York Times bestselling author Robin Talley weaves together the lives of two young women connected across generations through the power of words. A stunning story of bravery, love, how far we’ve come and how much farther we have to go.” 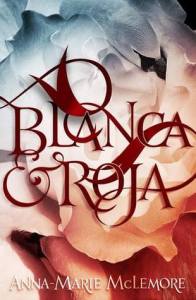 Anna-Marie McLemore blew me away with Wild Beauty, as well as her story in Toil & Trouble: 15 Tales of Women and Witchcraft. She captures magical realism so beautifully and I love the way she writes about queerness, identity, and sisterhood.

Goodreads summary: “The biggest lie of all is the story you think you already know.

The del Cisne girls have never just been sisters; they’re also rivals, Blanca as obedient and graceful as Roja is vicious and manipulative. They know that, because of a generations-old spell, their family is bound to a bevy of swans deep in the woods. They know that, one day, the swans will pull them into a dangerous game that will leave one of them a girl, and trap the other in the body of a swan.

But when two local boys become drawn into the game, the swans’ spell intertwines with the strange and unpredictable magic lacing the woods, and all four of their fates depend on facing truths that could either save or destroy them. Blanca & Roja is the captivating story of sisters, friendship, love, hatred, and the price we pay to protect our hearts.” 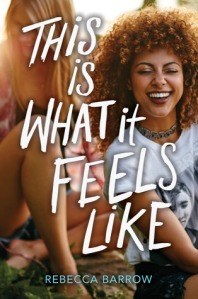 7. This Is What It Feels Like by Rebecca Barrow

Books about friends trying to repair their relationships after being torn apart are always favorites of mine. This one sounds like it could be a good read-a-like for The Beauty that Remains by Ashley Woodfolk, which is also about friends who’ve lost each other to their own unique traumas finding their way back to each other through music.

Goodreads summary: “It doesn’t matter what the prize for the Sun City Originals contest is this year.

Who cares that’s it’s fifteen grand? Who cares about a gig opening for one of the greatest bands to ever play this town?

Not Dia, that’s for sure. Because Dia knows that without a band, she hasn’t got a shot at winning Sun City. Because ever since Hanna’s drinking took over her life, Dia and Jules haven’t been in it. And ever since Hanna left — well, there hasn’t been a band.

It used to be the three of them, Dia, Jules, and Hanna, messing around and making music and planning for the future. But that was then, and this is now — and now means a baby, a failed relationship, a stint in rehab, all kinds of off beats that have interrupted the rhythm of their friendship. No contest can change that. Right?

But like the lyrics of a song you used to play on repeat, there’s no forgetting a best friend. And for Dia, Jules, and Hanna, this impossible challenge — to ignore the past, in order to jumpstart the future — will only become possible if they finally make peace with the girls they once were, and the girls they are finally letting themselves be.

Rebecca Barrow’s tender story of friendship, music, and ferocious love asks — what will you fight for, if not yourself?” 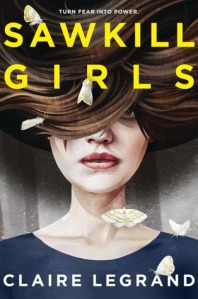 Every Fall TBR needs a spooky, dark, and atmospheric book! This one is queer, feminist, and diverse (bi rep, fat rep, POC rep, and ace rep are the identities reviewers have noted).

Goodreads summary: “Who are the Sawkill Girls?

Marion: the new girl. Awkward and plain, steady and dependable. Weighed down by tragedy and hungry for love she’s sure she’ll never find.

Zoey: the pariah. Luckless and lonely, hurting but hiding it. Aching with grief and dreaming of vanished girls. Maybe she’s broken—or maybe everyone else is.

Val: the queen bee. Gorgeous and privileged, ruthless and regal. Words like silk and eyes like knives, a heart made of secrets and a mouth full of lies.

Their stories come together on the island of Sawkill Rock, where gleaming horses graze in rolling pastures and cold waves crash against black cliffs. Where kids whisper the legend of an insidious monster at parties and around campfires.

Where girls have been disappearing for decades, stolen away by a ravenous evil no one has dared to fight… until now.” 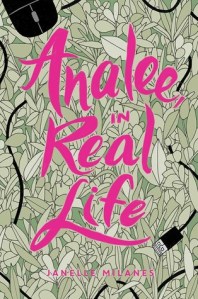 Goodreads summary: “Ever since her mom died three years ago, Analee Echevarria has had trouble saying out loud the weird thoughts that sit in her head. With a best friend who hates her and a dad who’s marrying a yogi she can’t stand, Analee spends most of her time avoiding reality and role-playing as Kiri, the night elf hunter at the center of her favorite online game.

Through Kiri, Analee is able to express everything real-life Analee cannot: her bravery, her strength, her inner warrior. The one thing both Kiri and Analee can’t do, though, is work up the nerve to confess her romantic feelings for Kiri’s partner-in-crime, Xolkar—aka a teen boy named Harris whom Analee has never actually met in person.

So when high school heartthrob Seb Matias asks Analee to pose as his girlfriend in an attempt to make his ex jealous, Analee agrees. Sure, Seb seems kind of obnoxious, but Analee could use some practice connecting with people in real life. In fact, it’d maybe even help her with Harris.

But the more Seb tries to coax Analee out of her comfort zone, the more she starts to wonder if her anxious, invisible self is even ready for the real world. Can Analee figure it all out without losing herself in the process?” 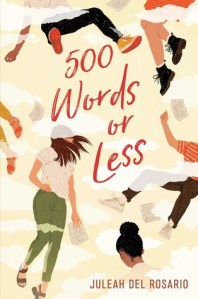 Books in verse are great for breaking up long reading lists, and I love that this one is about a girl trying to figure out who she is in a sea of other people trying to decide that for her.

Goodreads summary: “Nic Chen refuses to spend her senior year branded as the girl who cheated on her charismatic and lovable boyfriend. To redefine her reputation among her Ivy League–obsessed classmates, Nic begins writing their college admissions essays.

But the more essays Nic writes for other people, the less sure she becomes of herself, the kind of person she is, and whether her moral compass even points north anymore.”

What’s on your Fall TBR?