This week’s theme was Winter TBR. Mine is an eclectic mix of all the books I’m excited to read in the coming Winter weeks, including some seasonal-themed reads, early 2019 releases, and some sci-fi titles!

1. My True Love Gave to Me: Twelve Holiday Stories edited by Stephanie Perkins

I just checked this one out from my library to get into the holiday spirit and I’m super excited to start it soon!

Goodreads summary: “If you love holiday stories, holiday movies, made-for-TV-holiday specials, holiday episodes of your favorite sitcoms and, especially, if you love holiday anthologies, you’re going to fall in love with My True Love Gave To Me: Twelve Holiday Stories by twelve bestselling young adult writers, edited by international bestselling author Stephanie Perkins. Whether you enjoy celebrating Christmas or Hanukkah, Winter Solstice or New Year’s there’s something here for everyone. So curl up by the fireplace and get cozy. You have twelve reasons this season to stay indoors and fall in love.”

This one’s on hold for me at the library, and Destiny’s review got me super excited for it!

Goodreads summary: “What’s better than one deliciously cozy, swoon-worthy holiday story? Four of them, from some of today’s bestselling authors.

From KASIE WEST, a snowy road trip takes an unexpected detour when secrets and crushes are revealed.

From AIMEE FRIEDMAN, a Hanukkah miracle may just happen when a Jewish girl working as a department store elf finds love.

From NIC STONE, a scavenger hunt amid the holiday crowds at an airport turns totally romantic.

So grab a mug of hot cocoa, snuggle up, and get ready to fall in love…” 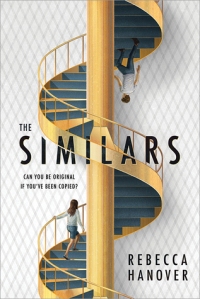 3. The Similars by Rebecca Hanover

Something about eerie sci-fi novels feels perfect for chilly winter weather. I’ve got an ARC of this one sitting at home waiting for me!

Goodreads summary: “When six clones join Emmaline’s prestigious boarding school, she must confront the heartbreak of seeing her dead best friend’s face each day in class.

The Similars are all anyone can talk about at the elite Darkwood Academy. Who are these six clones? What are the odds that all of them would be Darkwood students? Who is the madman who broke the law to create them? Emma couldn’t care less. Her best friend, Oliver, died over the summer and all she can think about is how to get through her junior year without him. Then she comes face-to-heartbreaking-face with Levi—Oliver’s exact DNA replica and one of the Similars.

Emma wants nothing to do with the Similars, but she keeps getting pulled deeper and deeper into their clique, uncovering dark truths about the clones and her prestigious school along the way. But no one can be trusted…not even the boy she is falling for who has Oliver’s face.”

4. The Birds, the Bees, and You and Me by Olivia Hinebaugh

Another January release that I’m eager to get started on!

Goodreads summary: “Seventeen-year-old Lacey Burke is the last person on the planet who should be doling out sex advice. For starters, she’s never even kissed anyone, and she hates breaking the rules. Up until now, she’s been a straight-A music geek that no one even notices. All she cares about is jamming out with her best friends, Theo and Evita.

But then everything changes.

When Lacey sees first-hand how much damage the abstinence-only sex-ed curriculum of her school can do, she decides to take a stand and starts doling out wisdom and contraception to anyone who seeks her out in the girls’ restroom. But things with Theo become complicated quickly, and Lacey is soon not just keeping everyone else’s secrets, but hers as well.”

5. Our Year of Maybe by Rachel Lynn Solomon

I was ecstatic when I got approved for an eARC of one of my most anticipated 2019 reads! Hopefully I can start this one soon.

Goodreads summary: “Aspiring choreographer Sophie Orenstein would do anything for Peter Rosenthal-Porter, who’s been on the kidney transplant list as long as she’s known him. Peter, a gifted pianist, is everything to Sophie: best friend, musical collaborator, secret crush. When she learns she’s a match, donating a kidney is an easy, obvious choice. She can’t help wondering if after the transplant, he’ll love her back the way she’s always wanted.

But Peter’s life post-transplant isn’t what either of them expected. Though he once had feelings for Sophie too, he’s now drawn to Chase, the guitarist in a band that happens to be looking for a keyboardist. And while neglected parts of Sophie’s world are calling to her—dance opportunities, new friends, a sister and niece she barely knows—she longs for a now-distant Peter more than ever, growing increasingly bitter he doesn’t seem to feel the same connection.

Peter fears he’ll forever be indebted to her. Sophie isn’t sure who she is without him. Then one blurry, heartbreaking night twists their relationship into something neither of them recognizes, leading them to question their past, their future, and whether their friendship is even worth fighting for.”

Another sci-fi novel, out this week! I love that purple cover and am really curious about this one.

Goodreads summary: “Hotshot pilot Nax Hall has a history of making poor life choices. So it’s not exactly a surprise when he’s kicked out of the elite Ellis Station Academy in less than twenty-four hours.

But Nax’s one-way trip back to Earth is cut short when a terrorist group attacks the Academy. Nax and three other washouts escape—barely—but they’re also the sole witnesses to the biggest crime in the history of space colonization. And the perfect scapegoats.

On the run and framed for atrocities they didn’t commit, Nax and his fellow failures execute a dangerous heist to spread the truth about what happened at the Academy.

They may not be “Academy material,” and they may not get along, but they’re the only ones left to step up and fight.” 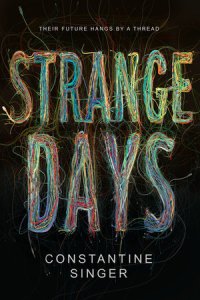 I haven’t heard too much about this one, but it sounds spooky and is full of aliens. I just put a hold on the eBook through Libby and I’m looking forward to reading it under the covers to hide from the winter weather.

Goodreads summary: “Alex Mata doesn’t want to worry about rumors of alien incursions – he’d rather just skate and tag and play guitar. But when he comes home to find an alien has murdered his parents, he’s forced to confront a new reality: Aliens are real, his parents are dead, and nobody will believe him if he says what he saw. On the run, Alex finds himself led to the compound of tech guru Jeffrey Sabazios, the only public figure who stands firm in his belief that aliens are coming.

At Sabazios’ invitation, Alex becomes a “Witness”—one of a special group of teens gifted with an ability that could save the Earth: they can glide through time and witness futures. When a Witness sees a future it guarantees that it will happen the way it’s been seen, making their work humanity’s best hope for controlling what happens next and stopping the alien threat. Guided by Sabazios, befriended by his fellow time travelers, and maybe even falling in love, Alex begins to find a new home at the compound — until a rogue glide shows him the dangerous truth about his new situation.

Now in a race against time, Alex must make a terrible choice: save the people he loves or save the world instead.

Debut author Constantine Singer’s fresh-voiced protagonist leaps off the page in this captivating novel that weaves sci-fi and contemporary fiction.” 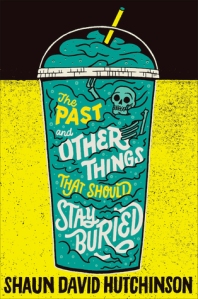 8. The Past and Other Things That Should Stay Buried by Shaun David Hutchinson

Something about zombies feels wintery, and this February release is by one of my absolute favorite YA authors. My local indie bookstore was nice enough to give me an ARC they received!

Goodreads summary: “A good friend will bury your body, a best friend will dig you back up.

Dino doesn’t mind spending time with the dead. His parents own a funeral home, and death is literally the family business. He’s just not used to them talking back. Until Dino’s ex-best friend July dies suddenly—and then comes back to life. Except not exactly. Somehow July is not quite alive, and not quite dead.

As Dino and July attempt to figure out what’s happening, they must also confront why and how their friendship ended so badly, and what they have left to understand about themselves, each other, and all those grand mysteries of life.”

9. The House That Lou Built by Mae Respicio

I’ve had this middle grade eBook checked out for a while and am hoping to finally read it this season! I love that it’s got #OwnVoices Filipino rep.

Goodreads summary: “Lou Bulosan-Nelson is going to build her dream. She shares a room with her mom in her grandmother’s house in San Francisco, and longs for a place of her own where she can escape her lovable but large extended Filipino family. Lou has a talent for woodshop class and creating projects, and plans to build a tiny house, 100 square feet, all her own, on land that she inherited from her dad, who died before she was born. Then Lou discovers it’s not so easy to build one, but she won’t give up on her dream—and her friends and family won’t either. This heartwarming coming-of-age story explores culture and family, forgiveness and friendship, and what makes a house a true home.”

10. Black Enough: Stories of Being Young & Black in America edited by Ibi Zoboi

This is one of the January releases I’m most excited for! I can’t wait for our library copy to get in.

Goodreads summary: “Black Enough is a star-studded anthology edited by National Book Award finalist Ibi Zoboi that will delve into the closeted thoughts, hidden experiences, and daily struggles of black teens across the country. From a spectrum of backgrounds—urban and rural, wealthy and poor, mixed race, immigrants, and more—Black Enough showcases diversity within diversity.

Whether it’s New York Times bestselling author Jason Reynolds writing about #blackboyjoy or Newbery Honor-winning author Renee Watson talking about black girls at camp in Portland, or emerging author Jay Coles’s story about two cowboys kissing in the south—Black Enough is an essential collection full of captivating coming-of-age stories about what it’s like to be young and black in America.”

What’s on your winter TBR?